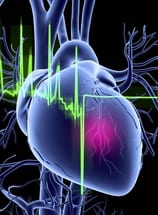 Cardiac resynchronization therapy (CRT), also known as biventricular pacing, is a relatively new approach to tackling the problem of heart arrhythmia (irregular heart rhythm). CRT involves implanting a pacemaker to normalize heart rhythm, and alleviate symptoms associated with arrhythmia. It differs from other therapies using pacemakers by addressing the fact that, in approximately 30 percent of heart failure patients, the ventricles do not pump blood at precisely the same time. This lack of synchronicity results in decreased efficiency of blood flow.

CRT is generally prescribed for patients with moderate-to-severe symptoms of heart failure, whose left and right ventricles do not beat at the same time. This problem may be caused by the following:

Occasionally, heart arrhythmia occurs in a healthy heart as a result of stress, or for no apparent reason. In such cases, medical intervention may not be necessary.

CRT is contraindicated in patients with only mild symptoms of heart failure, and in those with diastolic heart failure, in which the left ventricle cannot relax in order to fill properly. CRT is only used for patients for whom medication has not been effective. Research studies have shown that CRT is equally effective for men and women.

By ensuring increased efficiency in heart function, CRT increases blood flow, and may relieve congestive-heart-failure symptoms such as shortness of breath, thereby increasing exercise capacity and a feeling of well-being. CRT not only improves quality of life for patients with heart failure and arrhythmia, it decreases their number of hospitalizations and lowers their mortality rates.

Interestingly, research has shown that CRT improves the anatomy of the heart, not just its function. Once implemented, CRT tends to reduce the size of the left ventricle, improving its ejection fraction, which is the percentage of blood leaving the heart each time it contracts.

In order to provide CRT, an implantation procedure is necessary. A pacemaker, approximately the size of a half dollar, is implanted right below the patient’s collarbone. The device is connected by wires to a monitor set up to detect any irregularities in the heartbeat. When an arrhythmia is detected, it is corrected with tiny electrical pulses.

CRT is very safe, although, as with all medical procedures, complications are possible. Implanting any type of pacemaker includes the risk of infection and/or residual pain. These problems are not common and, if they occur, are generally easily managed.